The Community Engagement and Advisory Committee (CEAC) is a group of citizen volunteers empowered by Town Council to act as additional eyes and ears within the community to help the flow of feedback from, and information to, town residents on different issues, and be an advisory committee to the Council.

CEAC was created in 2011 to fill the void left when several advisory groups dissolved, as well as to monitor the progress of the Community Sustainability Plan. However, the group's terms of reference and action plan were revised in 2018 to increase its relevance in the community and its cohesion with council and administration.

Mandate: CEAC’s purpose is to collect and present the views of Stakeholders, based on the five (5) Community Sustainability Plan Community Pillars of Culture, Recreation, Education & Wellness, Local Economy, and Natural and Built Environments.

CEAC members will meet the mandate using informal communication with friends, colleagues, neighbours, and formal public communication channels like surveys and open houses. The committee will regularly report back to council and administration with their findings and recommendations.

With the onset of COVID-19, current CEAC members continue to meet virtually and perform their duties. You can find the most recent 2020 COVID-19 Impact Citizen Survey Report by CEAC in this agenda package. 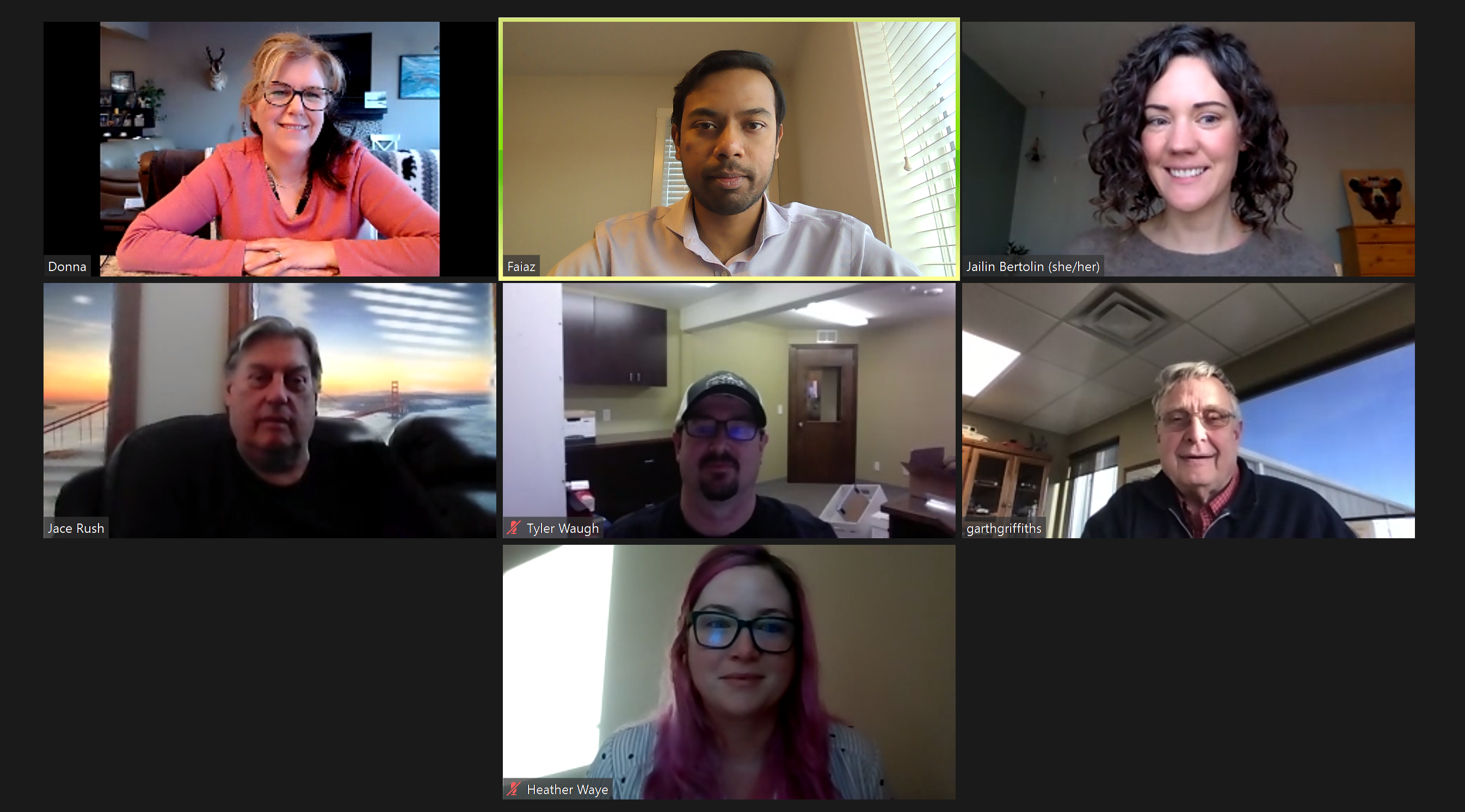 Jailin Bertolin
Chair, CEAC
Pillar: Recreation
Bio: Jailin was born in Hinton and it has been her home base ever since. She has a Masters of Disability and Community Studies, and her career has been focused on human services. As a volunteer, Jailin has been involved in many local cultural and recreational initiatives. You will often find Jailin hiking, skiing, biking, on the Beaver Boardwalk with her dog and attending live music events.

Jace Rush
Vice-chair, CEAC
Pillar: Culture
Bio: Jace Rush spent six years in the US Navy and immigrated to Canada in 1977. As a journeyman electrician, he worked in various lumber mills until 1985 and then spent 31 years working in service, parts and sales for large mining equipment suppliers. He moved to Hinton in 2016 after retiring to be close to family. Since moving here, he has volunteered for the Hinton library board, Hinton Good Companions and the Hinton Municipal Grant committee.

Garth Griffiths Pillar: Local Economy Bio: Garth has been a resident of Hinton for 50 years. He is happily married with 2 children in his personal life. In professional life, he is the President of Griffiths Ford, Overlander Mountain Lodge and Hinton Quick Lane. Garth has volunteered in a number of important positions, including as the President or Past President of Hinton Chamber of Commerce, Community Engagement and Advisory Committee, Hinton Hospital Board, Hinton Health Care Foundation.

Ross Risvold Pillar: Natural and Built Environments
Bio: Ross Risvold has served 4 terms in municipal politics including 3 terms as Mayor of Hinton. He has extensive experience pertaining to the sustainability of resource, rural and remote (R3) communities provincially, national and internationally. He has served on several Boards as a Director and Chair including Board of Directors for the Federation of Canadian Municipalities(FCM), and Chair of FCM’s International Center for Municipal Management, Chair of Alberta’s Beverage Container Management Board,  Chair, Foothills Model Forest (Foothills Research Institute),  Board of Alberta’s Climate Change Central,  National Advisory Board to Canada’s Minister of Natural Resources for forest research,  Independent Expert Panel for mid term evaluation of Canada’s National Forest Strategy. Ross has received several awards for his contribution to communities, fellow citizens and his achievements. Including : two Governor General of Canada Awards, Alberta Centennial Medal and the FCM Roll of Honour.

Donna Christensen Pillar: Education and Wellness
Bio: Donna and her family has called Hinton home since 2004. Her husband Garth and she has raised three children in Hinton and love all that Hinton has to offer. Since moving to Hinton, she has worked in higher education (Northern Lakes College, NorQuest College, GPRC and Alberta Apprenticeship) and as a Career and Employment Consultant for the Alberta Government. She is currently working at the Hinton Friendship Centre with the Circle of Learning Program. Her motivation to join the Town of Hinton CEAC committee comes from her passion for education and its ability to help people achieve their personal and career potential. She looks forward to many conversations about citizens' thoughts and ideas on our community and how we can work to make it even better!

Councillor Tyler Waugh Email   Councillor Albert Ostashek (Alternate) Email
The Citizens Advisory Group created our Community Sustainability Plan (CSP), a comprehensive document that helps in guiding the development and long term planning of Hinton. The concept of CSP was brought to Council in 2012, and after the bylaw was passed, CEAC was created in accordance with the Plan's recommendations.

The first CEAC committee (then known as the CSP Monitoring Committee) featured representatives from regional partners as well as citizens at large, who met to monitor progress on the CSP and report on the efficiency of efforts.

Now as a committee of Council, CEAC continues to help address problems and seek solutions as directed by Council.


Sincere thanks to every community resident who contributed to this plan through focus groups, surveys, community coffee shops and in other ways. Your ideas and insights make the plan real and realistic.


Our community is grateful for the many, many hours the Citizens Advisory Group spent in meetings and listening to the community. Your energy and your commitment to this project have made our dream for a sustainable future possible.

Thank you to Dan Pagely, Project Sponsor, Jean Anne Fraser and Bernie Kreiner who, collectively contributed throughout the process.

Financial Contributions
This plan was made possible by financial contribution and technical expertise from:

As a committee of Hinton Town Council, members of CEAC are appointed to their positions through a vote by Council during the annual organization meeting, usually held in October each year.

You can have your name considered to be a CEAC member by filling in and submitting this form.