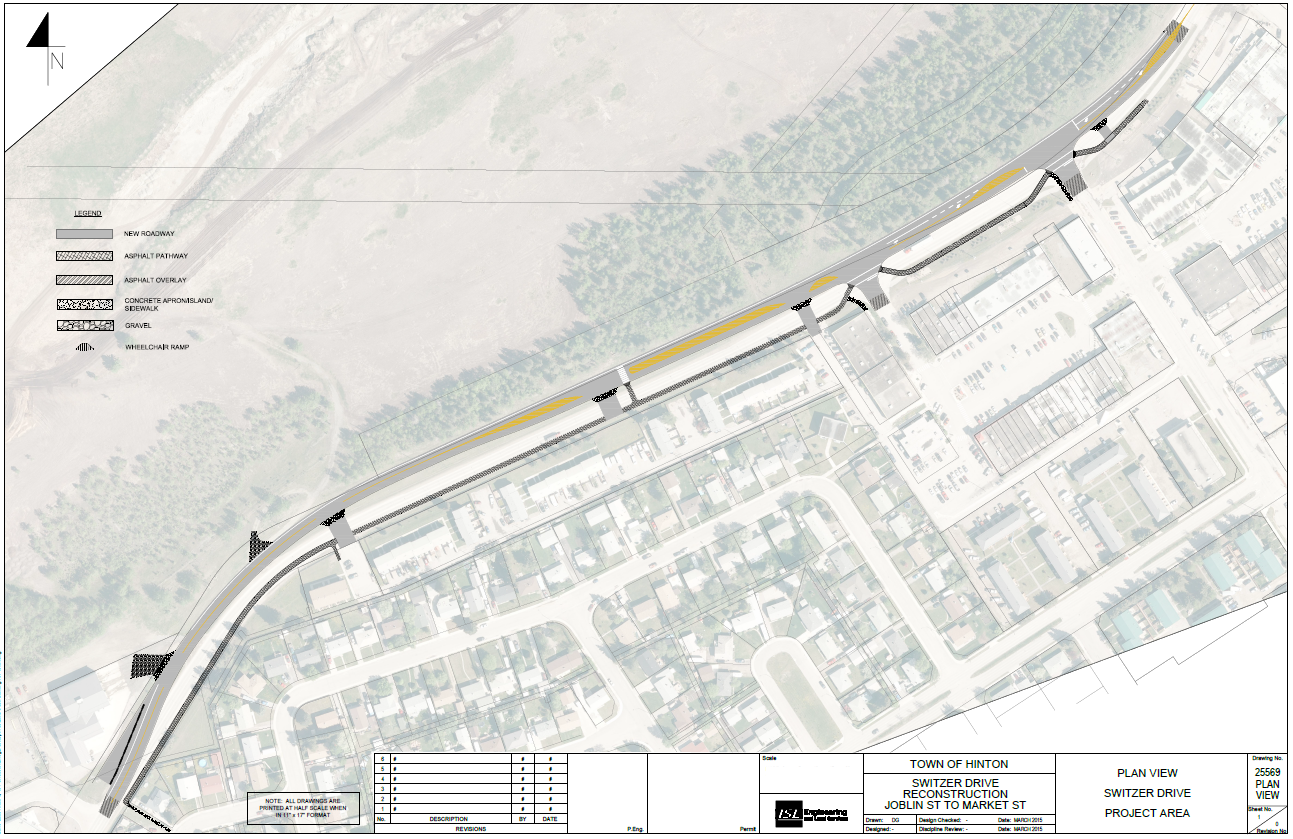 • Upgrading the main sanitary trunk that serves the eastern area of Hinton and ties into new Hardisty Lift Station project.

The new road infrastructure design (two lanes only) introduces stormwater management, a designated cross walk, improved street lighting and a pedestrian trail, which not only creates connectivity but promotes safer pedestrian movement in this area of our community.

Project Understanding:
The driving force behind the Switzer Drive project was the required upgrade of the aged sanitary sewer system. This upgrade in services was required to not only support existing but also developing districts within the community and furthermore provides connectivity to the new Hardisty Lift Station, a project also currently underway.

The Town’s growth and development over the past 55 years has added sanitary flows to the lift station which is carried through the sanitary line along Switzer Drive and on downstream to the outfall.  Today, the lift station receives flows that are estimated to be 5 times +/- its original design and as such creates maintenance challenges for the Town.

The Switzer Drive sanitary upgrades that tie-into the new Hardisty Lift station extend through to the intersection at Joblin Street.      The remainder of the system from Joblin Street to the West Fraser outfall is proposed to be designed and engineered in the 2015 Capital Budget and will be seeking approval to complete the engineered design upgrade from Council early this year.

One of the key challenges in upgrading the sanitary services was being able to maintain traffic flow east and west bound on a resource road (Switzer Drive) to the community-at-large, commercial, and industrial sectors.     Understanding that alternative accesses such as Drinnan Way and Hardisty Avenue were not viable options (existing road surfaces are not designed to support the turning movements or weight of large truck traffic).     Furthermore this diversion of traffic would be at a time when an elementary school zone on Hardisty Avenue is in session.

The project has undertaken much public and political scrutiny as the initial design for construction looked at developing to four lanes of traffic which is the “ultimate design” for population growth at 30,000.   This option allowed the existing road to be cut open for the construction of removing and replacing the new sanitary line.   Recognizing the challenge of keeping the road open during the underground construction and scrutiny of developing to the ultimate design, the design was re-evaluated and a successful alternative design was produced. This new design accounts for future growth by incorporating stormwater management which meets both the current and “ultimate” design needs for this area. This design also allows for the future construction of the “ultimate” road to be completed safely with minimal disruption to the traveling public.

In December, 2013, the Town used new technology known as trenchless technology to reline the aged sanitary line between Government Road and Joblin Street.    This technology allowed the Town to work within the limits of the road right-of-way, maintain traffic flow, have zero impact on the adjacent waterlines and minimize disturbances to private services, which tie-in to the main.     This allowed the Town to install another sanitary line (the upgrade in capacity) on the north side of Switzer Dr. that runs parallel to the existing. New manholes and flow diversion structures have been designed and installed to manage the new lift stations higher capacity.

With the majority of the sanitary and storm upgrades being completed in 2014, the Town will be moving ahead with developing the two new lanes of traffic between the intersections of Joblin Street and Drinnan Way.        The existing road between these intersections has been recently identified as having a failed subgrade.    In the simplest of terms, this means that any additional lifts of asphalt will simply be patching the surface which in time will allow the cracks to propagate through to the surface. The failure is in the sub-base of the road which would require completed removal of asphalt and granular structures followed by re-compaction and stabilization of the base material, prior to any reconstruction.

This area of road construction also considered the “ultimate” design (four lanes of traffic) and to ensure that the road upgrades being done today mitigated as much “throw-away” costs for the future design as possible.      Stormwater management and pedestrian safety in this area was also considered in the design.   The stormwater manage is currently a natural/rural drainage which created maintenance issues on this road  and the 2015 construction design incorporates a curb and swale drainage and introduces a pedestrian trail to enhance the safety along this corridor.   New street lighting will be installed to align with the new road and provide light to the pedestrian trail.

Project Partners:
From conception in 2013 through to construction completion, the Town of Hinton and ISL Engineering and Land Services , work in partnership to design, engineer and deliver a project on schedule and budget.     Border Paving, the General Contractor, is the successful bidder from the tendering process and mobilized to site on June 25, 2014.

The Resource Road Program initially sought to fund upgrades to Robb Road, the program was changed be applied to Switzer Drive after Council heard from our community that the investment to Robb Road was not deemed a priority in our infrastructure construction program.     Council championed the voice of the community and was supported by our MLA and the Alberta Transportation Minister to have this grant transferred to support the Switzer Drive project.

It is through these partnerships that the project continually progresses towards a successful completion.

The Switzer Drive Reconstruction Project had some unique design considerations and construction challenges.

• Geotechnical testing in the area revelled a thin seam of clay that runs through the road right-of-way. This layer of clay was removed from the road footprint as part of optimizing the roadway structures design.
• Design and construction of a stormwater management system to best accommodate both the current and “ultimate” design requirements for the roadway.
• Design and construction of a sanitary system that maintains a high level of service to local residents.
• Coordination of various utility (power, internet and telephone providers) that are present throughout the project area. Relocation of both above and below ground utilities required careful coordination to minimize service disruptions.
• Accommodating the traveling public by maintaining traffic flows east and west bound while transitioning the new road to meet with existing road.
• Maintaining traffic access for residential and commercial properties.
• Streetlight design and construction that provides safe lighting for travel of both motorized and non-motorized commuters along Switzer Drive.
• Winterization of the project area providing a safe area for the winter months.
• The construction schedule is subject to weather conditions. 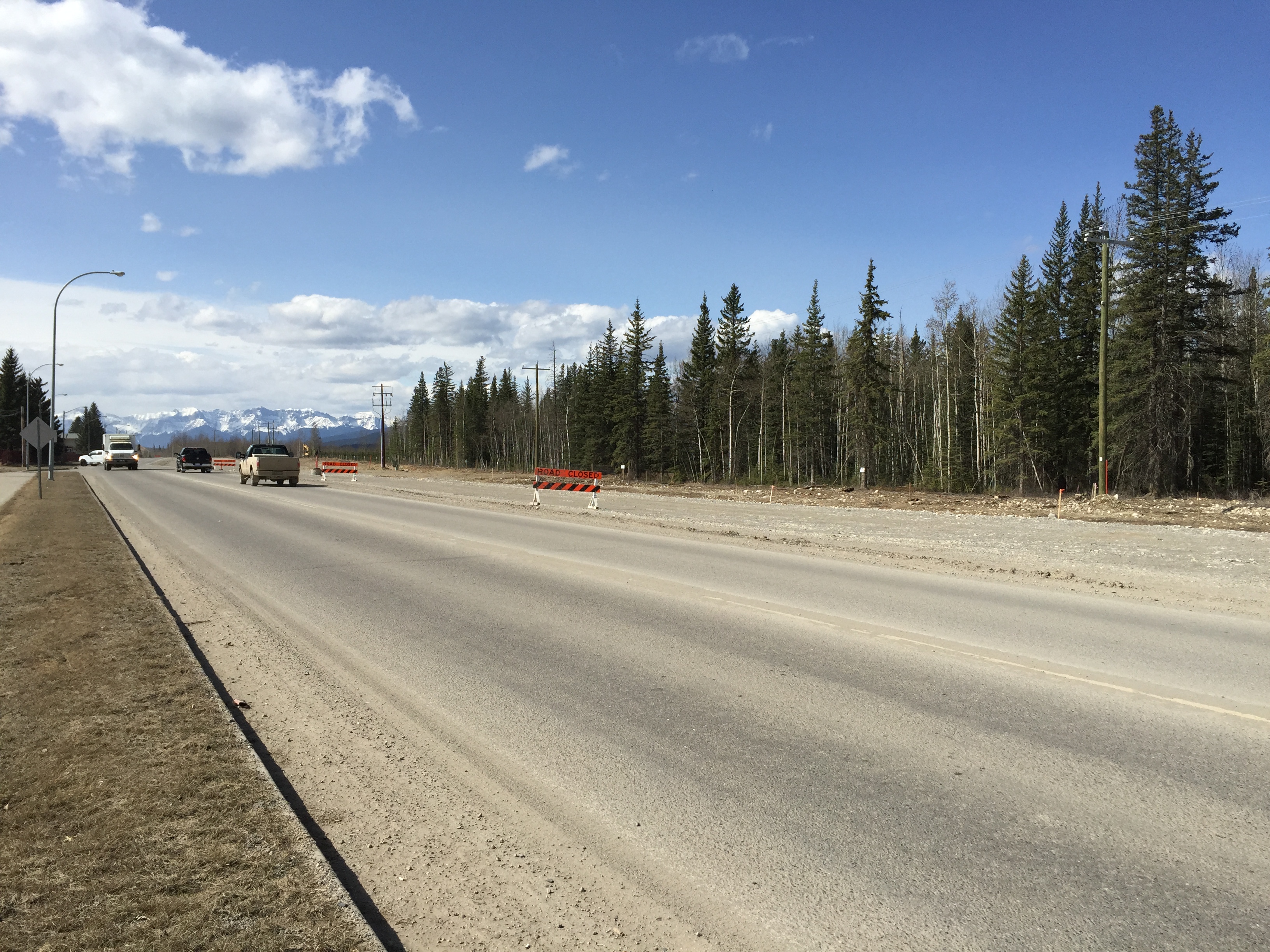 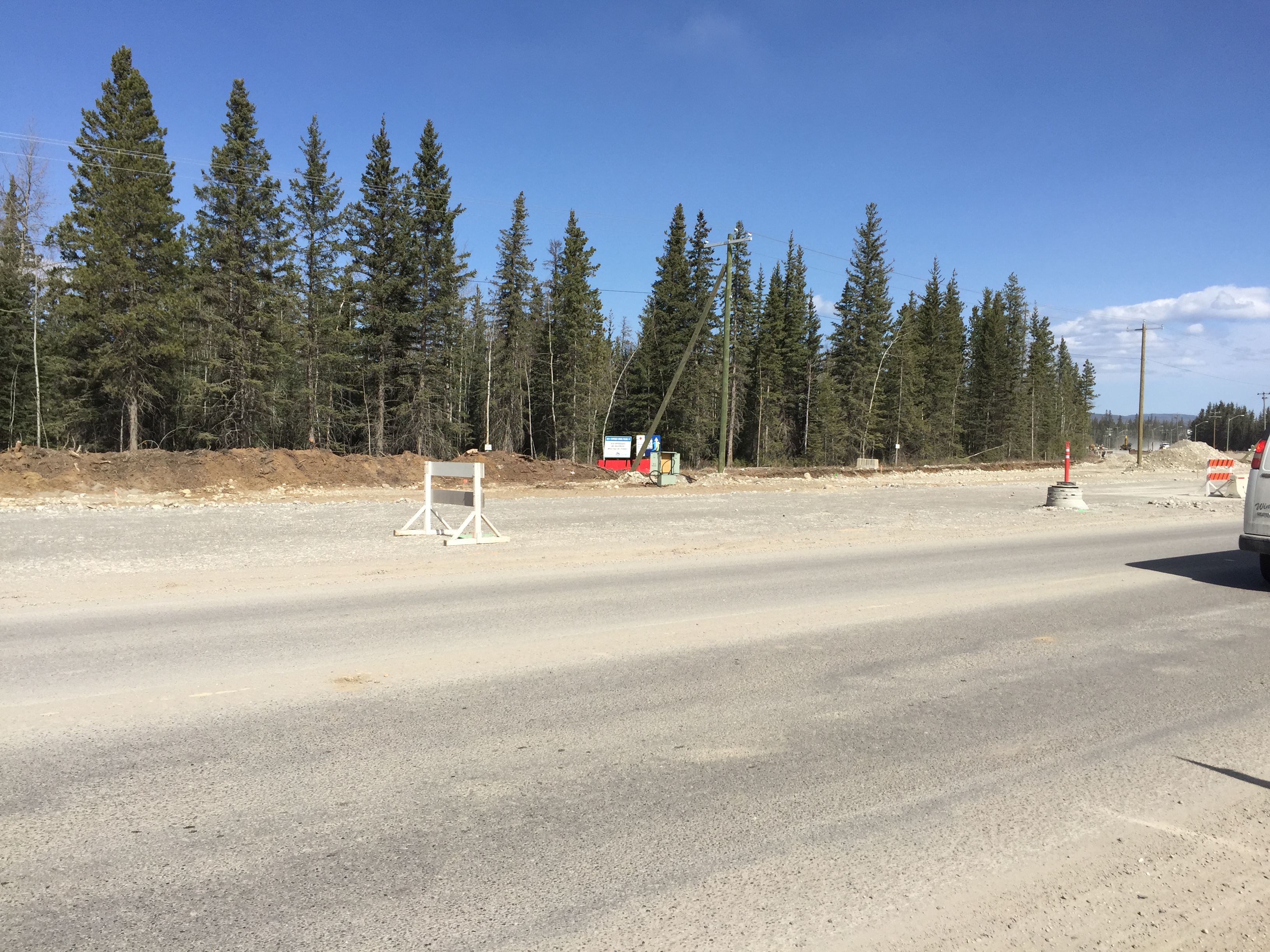 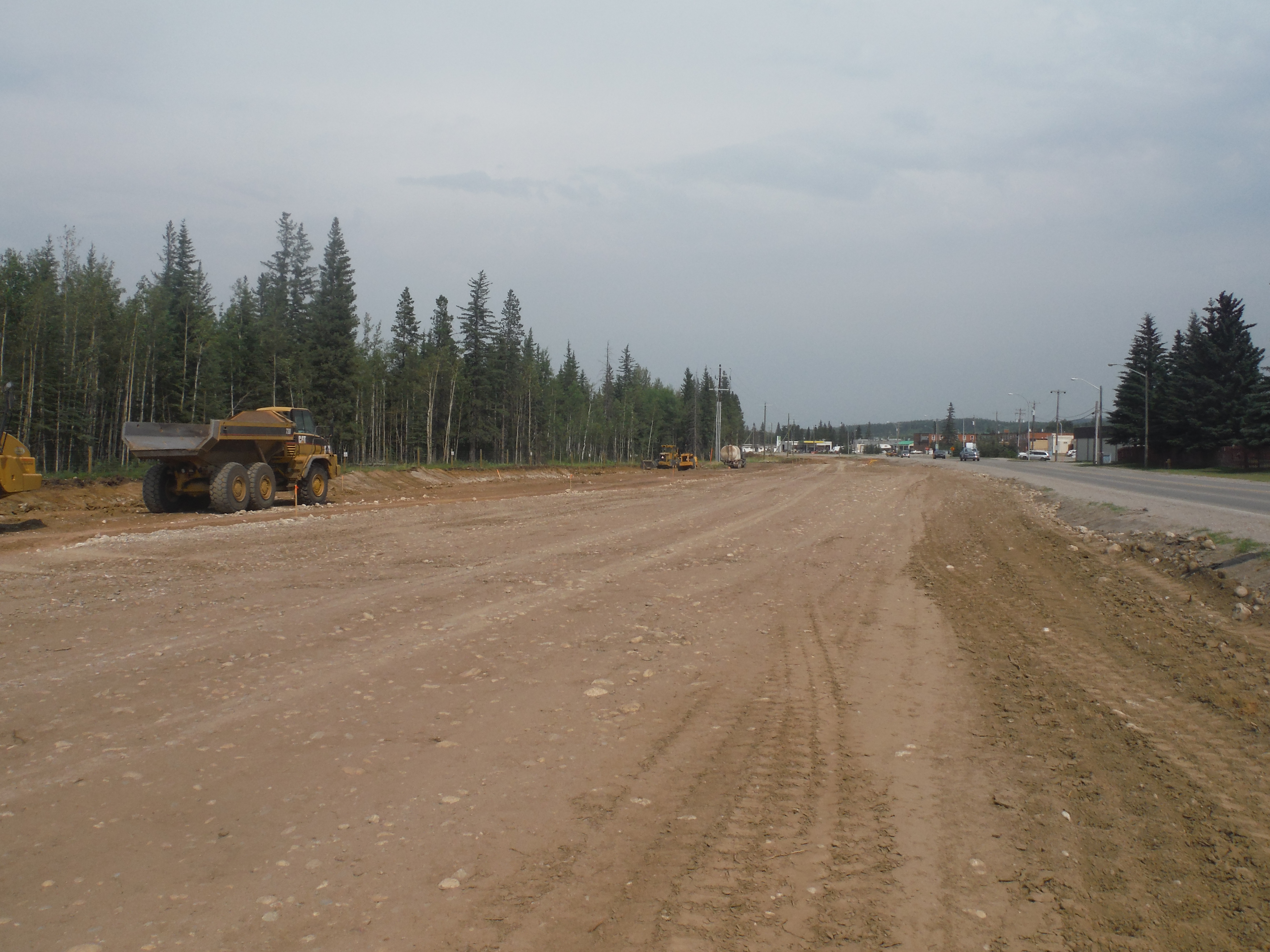 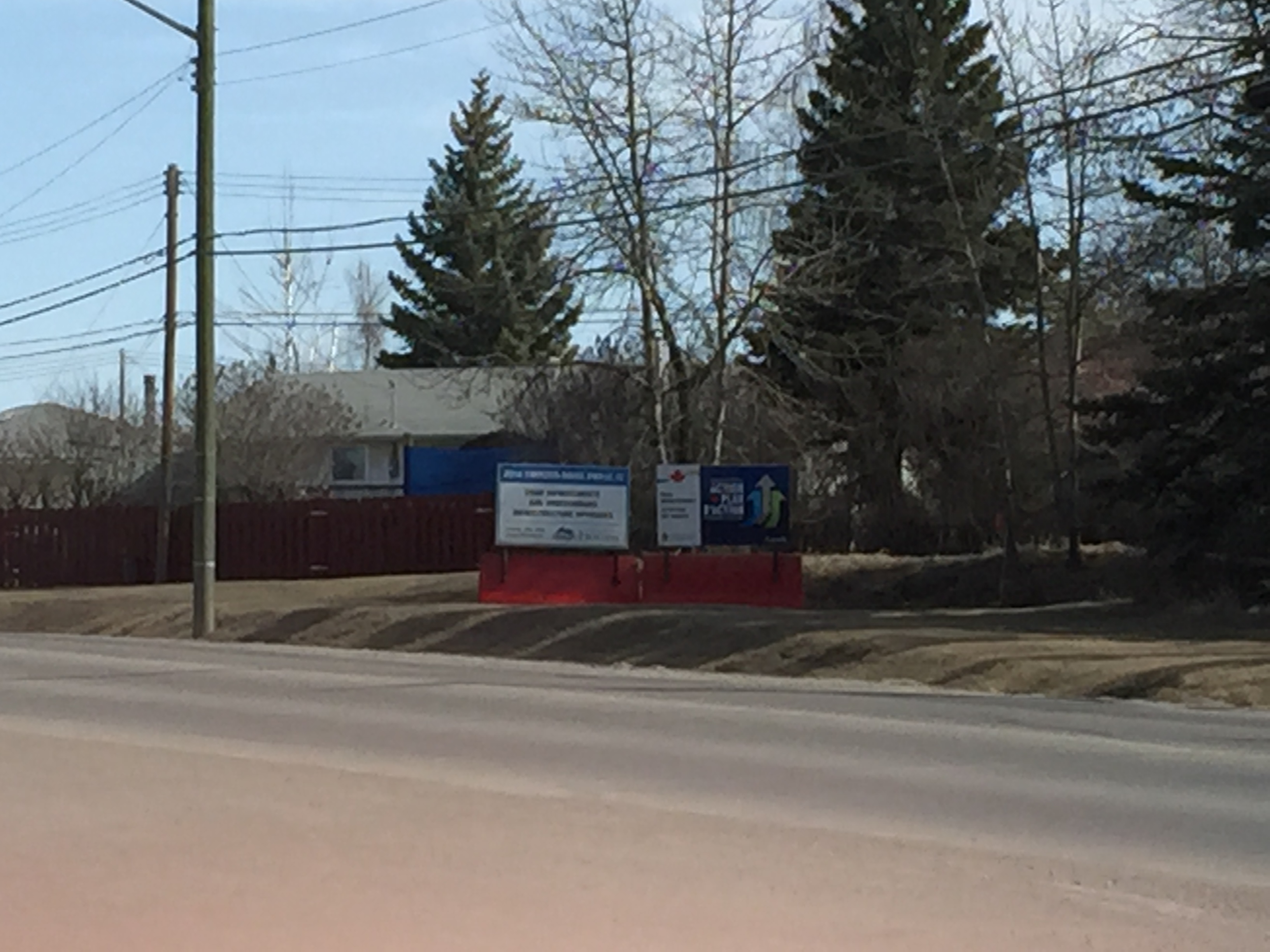 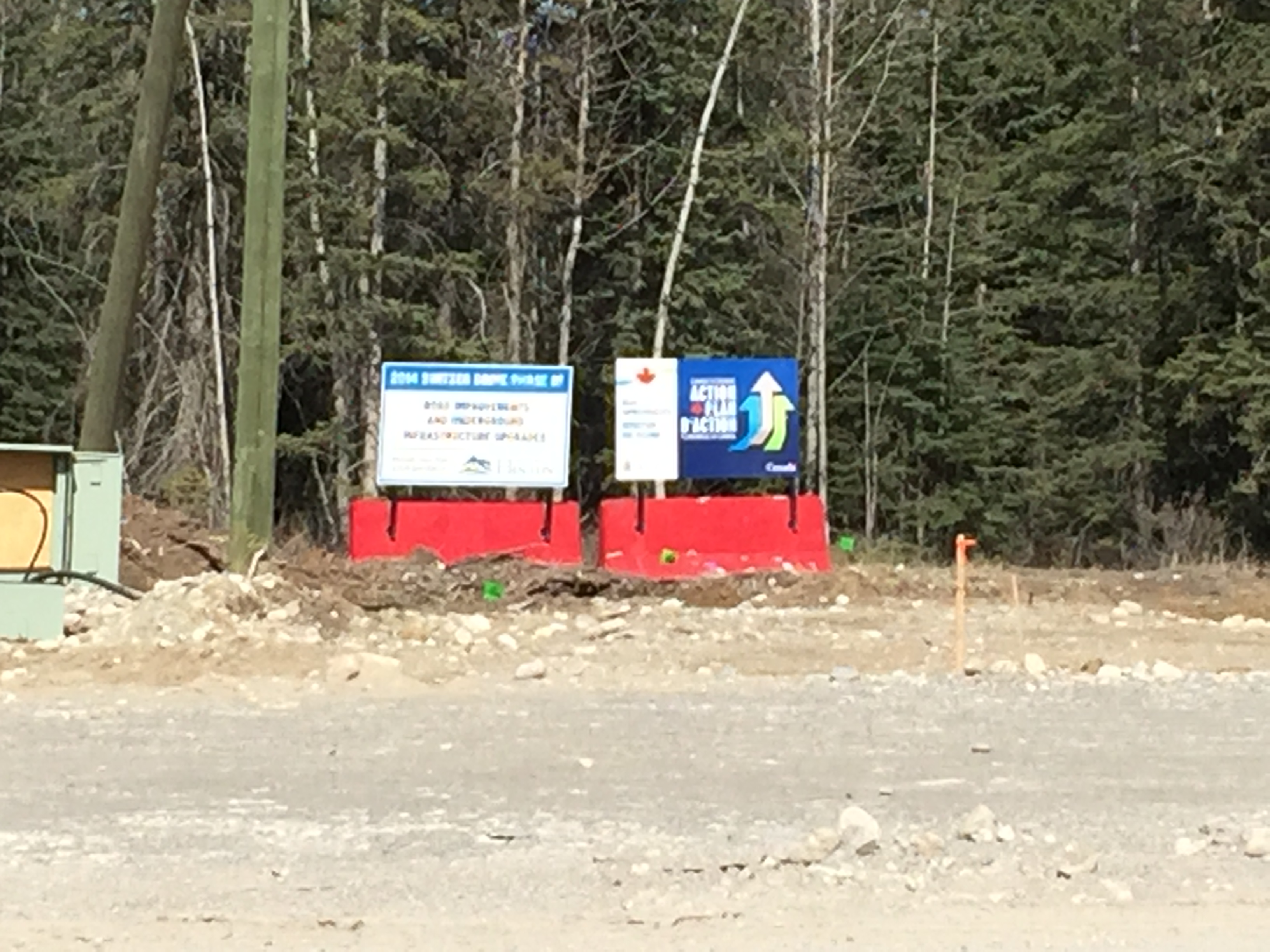 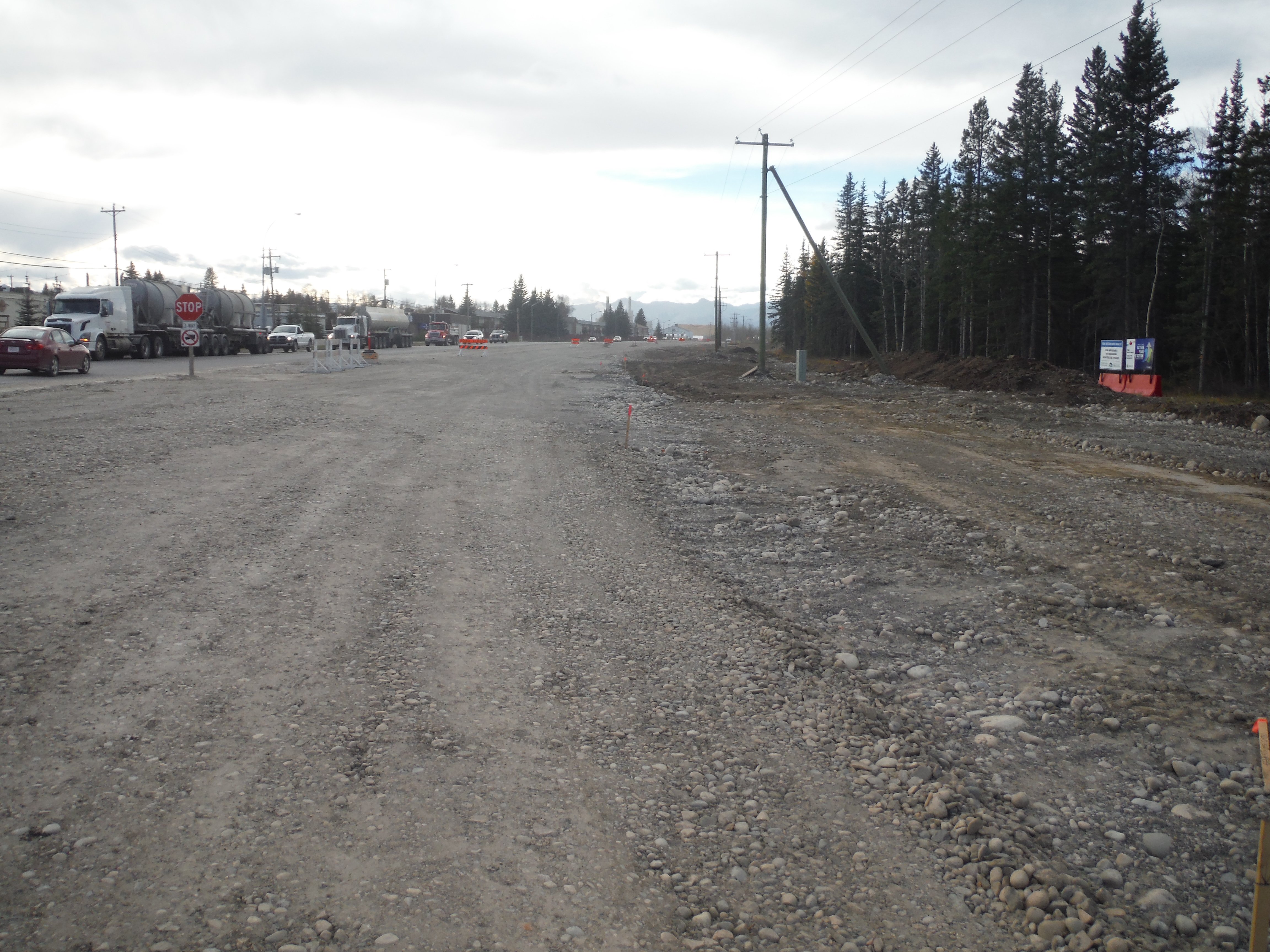